Despite buying this back in November (see the haul here) I only opened this last month and thought I’d do a little review of it here. I love a good pencil eyeliner so thought I would put the L’Oréal Paris Infallible Eyeliner in 303 Shimmering Black to the test.

I actually picked up the shimmering black by accident and only looked at the label once I’d opened it so I was stuck. For any non-UK readers, as I know returns policies vary, once a product is brought and opened it cannot be returned unless an item is faulty items can only be returned if in a resalable condition. Which kind of sucks but it meant I actually was pushed to find a use for it and put it to the test, perfect for reviewing.

I love the fact this is a thin twist up eyeliner so that I don’t have to remember to sharpen it and it keeps it as a thin, narrow pencil which is what you want in an eyeliner. It twisted up and past the initial swatch and getting off probably a light coating, it’s smooth and creamy and goes on perfectly. I was so impressed of how well it went on and it didn’t need blending especially the first time I used it. The only place it needs building up is on the water/type line but on the eyelid itself it was no problem at all. 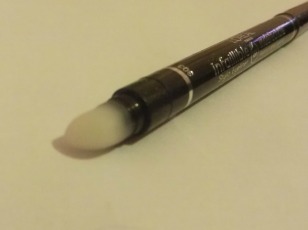 The first day I put in on under my eyes, type line and along my lash line while wearing eyeshadow. Unfortunately it didn’t last the day upon checking my makeup at in the toilets at 3:00pm it was patchy and broken up despite the rest of my eyes still looking perfect from my primer. It has also come off under my eyes although that was more faded than broken. Then I tried it on its own, which seemed to last much better with only minor fading. It seems to last way better on its own rather than pair with eyeshadow which is a shame it cannot be used both ways, so will just be for a simple makeup day.

I later tried it to create a lazy smoky eye and it smudged out to essentially nothing, which was super disappointing, I ended up taking off my makeup and starting it all over again. This may be more of a colour issues as the black in it is not super pigmented rather than the product itself. However the poor performance in terms of longevity really has put me off bothering with buying the actual black eyeliner as I fear it will crack, fade or come off variable

Overall it’s a decent eyeliner but with its inability to last when paired I cannot recommend it, it may work for you if you don’t wear eyeshadow but it is not versatile and its staying power is so-so. So I think it may be best to look elsewhere for your eyeliner needs, let me know if you have any other recommendations for pencil/windup eyeliners in the comments.

Blue skies for days. #summervibes🌞
Officially the best ways to spend the New Years break, back to reality tomorrow. 🇵🇹 . . . #albuferia #portugal #algarve
We definitely don't look like this now.
We're all to blame for the wounded world 🎶 Cannot get over how good @asitisofficial are, perfect night to celebrate the end of an era. . . . #asitis #bentodaygonetomorrow #camden
Sometimes it's worth getting up before everyone else and going on a decnet coffee adventure.
The long suffering bestie . . . who pretended she didnt like BUSTED til she gave in halfway through because nostalgia. Put up with waterparks and danced in the rain with me like a nut job. Love ya 💜🎶 Also general reminder of what how you slowly look worse as the day goes on and it rains on and off 🤣
It's always a good day when you end it with All Time Low. Slam Dunk hands down is one of my favourite festivals, 14 bands see in the sunshine and rain "and I wouldn't have it any other way"🎶 . Also can we talk about the fact Busted were the secret set like wow the nostalgia. . #slamdunk #sdf #sdf19 #festival #alltimelow #ATL #lessthanjake #ltj #waterparks #asitis #yellowcard #emo #scene #poppunk
Have I even been to see @hannahfaye___ if we haven't taken a photo together. Rounding a sunny bank holiday with my apparent fave. 💁🏻‍♀️💜
Early #tbt. But i cannot believe 7 years ago me and the bestie, got on a coach for 10 hours and snuck off to Glasgow for 3 days without a single adult knowing to go and see Yashin out of all the bands. Talk about being young and reckless. . #youngandreckless #formerlife #tourlife #tbt
Follow Gwen Blogs on WordPress.com